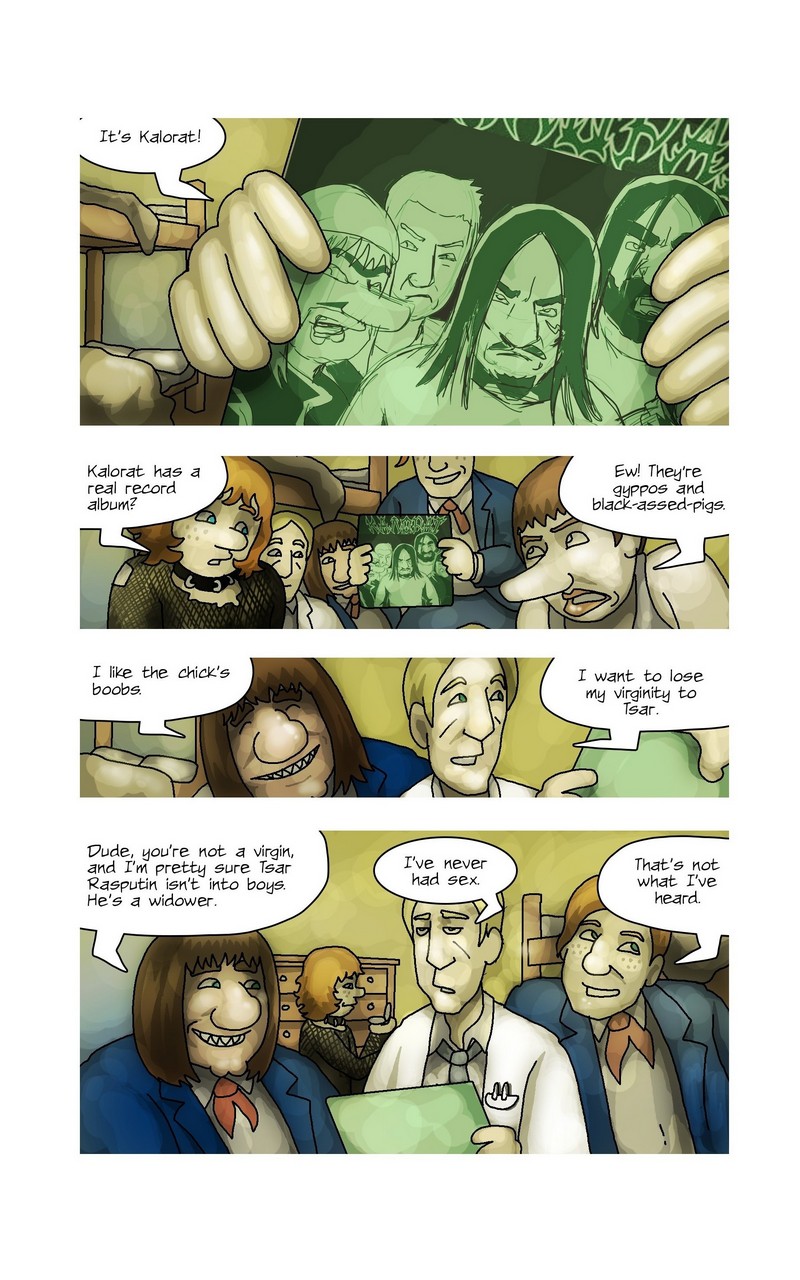 Two hands are holding a record cover. On it, you see Kameron 5’10” (with both eyes still intact, but looking the same as the first scene;) Tsar 6’0”; A lanky guy with short-hair t-shirt and jeans 6’0”; A heavy-set woman with freckles wearing a full Hijab and modest sweatshirt and broom skirt 5’11, and at 6’6” a bear-like bearded man. They all look menacing, pissed-off and “metal.” The cover looks photocopied and is black and light green. There is a text-only logo above them with the band’s name.

Frame 2
Zoya is wearing white undershirt with boots and jeans. Sasha wears a fishnet shirt. Dmitri and Ugly Alex are wearing school uniforms, and Lechy is wearing a lab coat with shirt, tie and black slacks and nice shoes. The kids are smoking or drinking except for Lechy.

Lechy
I want to lose my virginity to Tsar.

Dmitri
Dude, you’re not a virgin, and I’m pretty sure Tsar Rasputin isn’t into boys. He’s a widower.

Ugly Alex rolls his eyes at the offended Lechy.

Alex
That’s not what I’ve heard.

Sounds like Kalorat has something for everyone... wonder how their music is? XD
edit delete reply
20th May 2021, 9:30 AM
vaslittlecrow

They sound like a Russian version of Colombian ultra metal band, Parabellum, with a female lead singer. Getter would likely not dig it.
edit delete reply
20th May 2021, 9:54 PM
melaredblu

I mean, he's probably right. I'm also pretty sure Tsar probably isn't into boys. Men, on the other hand...
edit delete reply
21st May 2021, 7:33 AM
vaslittlecrow

Just catching up on the last few updates. I love that he plays in a metal band nice job with the font and record cover. I know I’ve said this before but also nice job on the Russian prison tattoos very accurate and cool.
edit delete reply
27th May 2021, 7:41 AM
vaslittlecrow

Thank you very much. I actually read two books by Danzig Baldaev and researched the hell of a lot of photographs and cross-references on the internet to get that. I tried to be very careful about making sure that we stuck with tattoos from the period just prior to the thieves-in-law instituting the ban on new tattoos (specifically those for prison bitches) to prevent cops from using them to mark gang leaders and some political prisoners improperly. We also made sure to use boot and piss ink line art rather than anything with color (which came about in the '80s after illegal tattoo parlors started opening.) When I used to have Pinterest, I actually had an entire section devoted to tattoo research. Then I would go ahead and draw tattoo maps for Ram. As you can see, Ram did an absolutely job translating them into the art. I deal with the tattoos more on my other comic, I Have Problems, which is very different in style and tone, and delves more into Tsar's life.
edit delete reply
27th May 2021, 7:42 AM
vaslittlecrow

And with that long-winded, I forgot to mention that I based that cover on real life single color photocopy covers that I would often see in the DIY market.
edit delete reply
Post a Comment