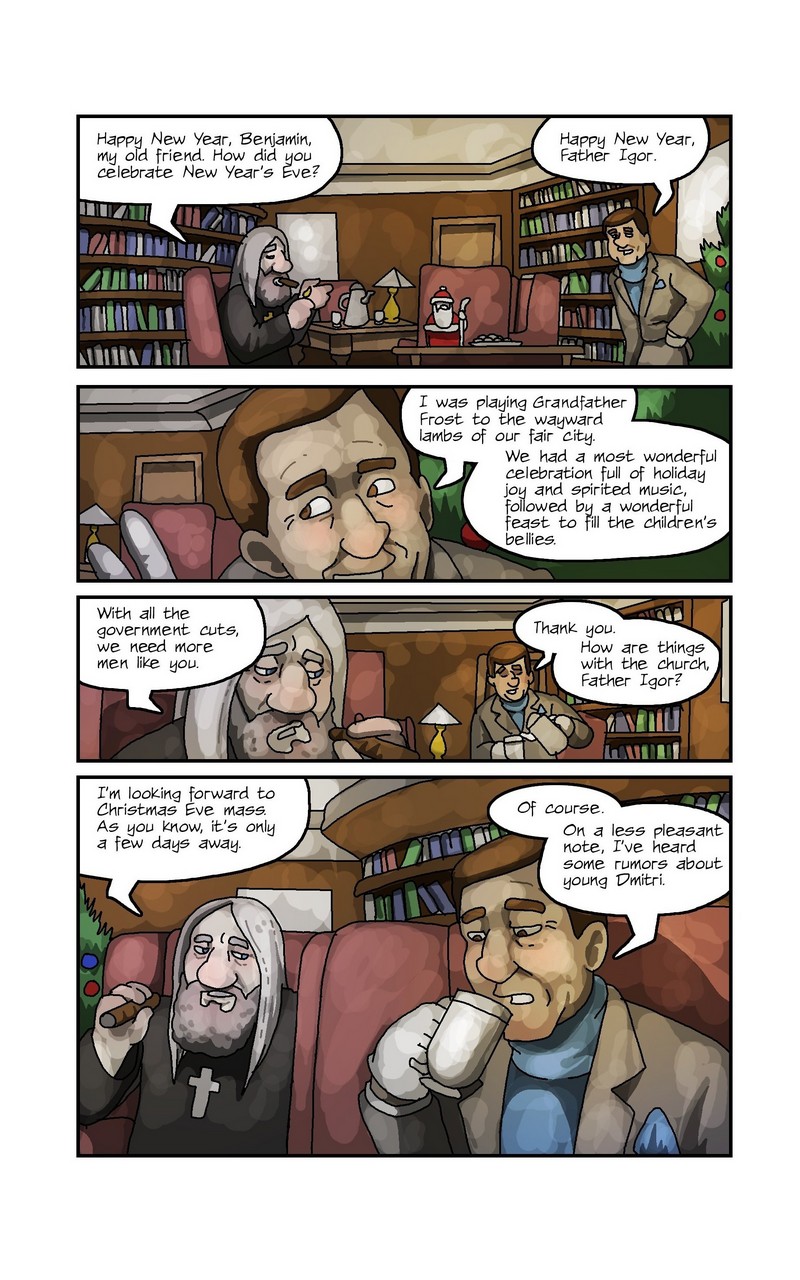 Benjamin Benitez and Father Igor are sitting across each other in a private library on some fancy chairs. There are ostentatious New Year’s (Russian Christmas) decorations everywhere. Father Igor is a pale, silver-haired man with long straight hair, steel blue eyes and a messy beard. He actually has some obvious structural resemblance to Dmitri, except for the fact that his face is less round and his teeth are normal. He is wearing a black robe and a cross, but no headgear.

Benjamin is somewhat more stocky man wearing a more typical gray suit jacket and slack. Benjamin’s a Spaniard who comes across as a very nice guy with light brown hair and brown eyes. He has white gloves to cover the burns on his hands and a blue turtleneck sweater. Both men are in their fifties, are smoking cigars and drinking coffee.

FRAME 2
Igor lights a cigar as he takes a seat next to a table with coffee service and cookies. Benjamin isn’t smoking.
IGOR:
How did you celebrate New Year’s Eve, Benjamin?
BENJAMIN:
I was playing Father Frost to the wayward lambs of our fair city. We had a most wonderful celebration full of holiday joy, spirited music and a wonderful feast to fill the children’s bellies.

FRAME 3
Benjamin is pouring himself a cup of coffee as the conversation continues.
IGOR:
With all the government cuts, we need more men like you.
BENJAMIN:
Thank you.
How are things at the church, Father Igor?

FRAME 4
IGOR:
I’m looking forward to Christmas Eve Mass. As you know, it’s only a few days away.

I was kind of a mess for a while. I had to deal with some batty stuff on social media, medical sexual abuse, in addition to my schizophrenia progressing to the point where I could barely remember my name. Thankfully, but I am much better now that I am permanently off Facebook. My mental health has been stabilized thanks to a great mental health team and home automation to aid memory care. I also got a settlement from the hospital where the abuse happened.

My husband and I are otherwise doing amazing, and I am nearly done posting the print editions of comics. Ram is still around and doing his own thing. I am looking to sharing my webcomics again and hope you enjoy them, as much as the team and I enjoyed making them. Thanks for stopping by!
edit delete reply
Post a Comment