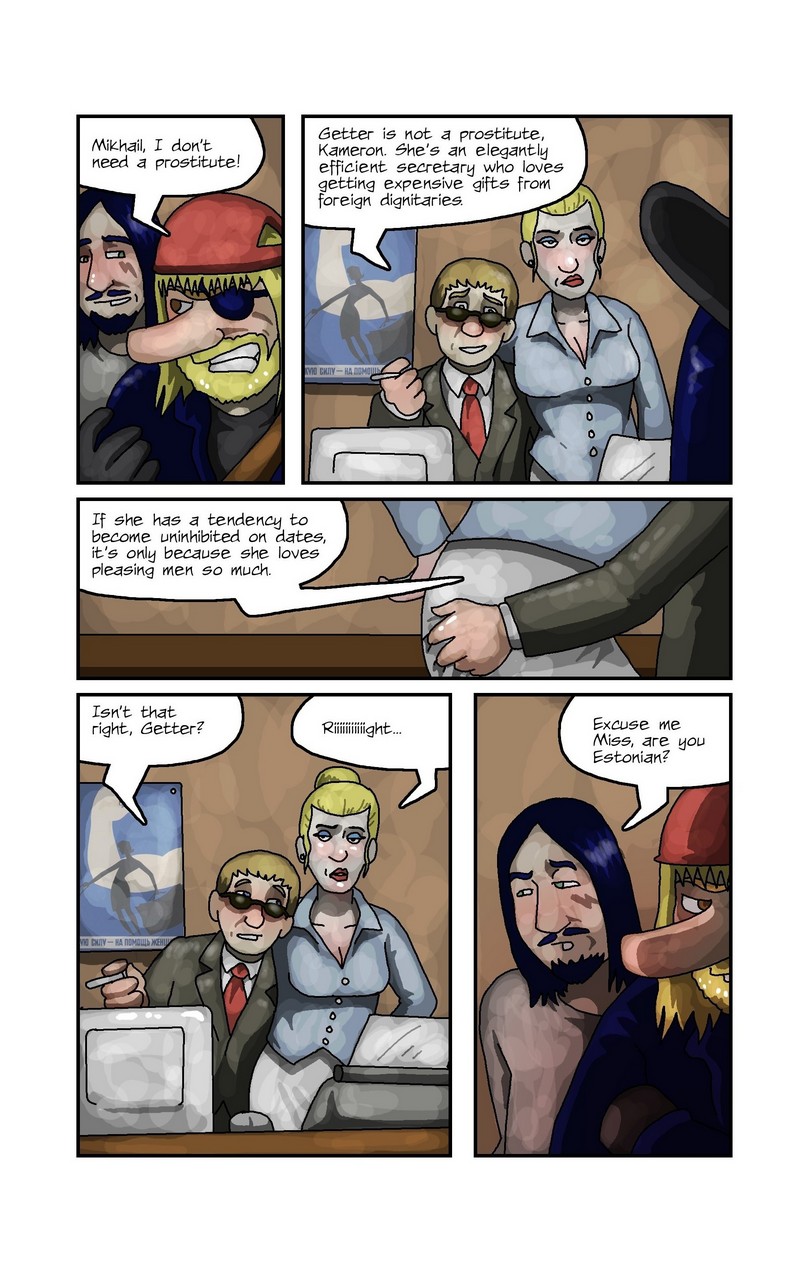 Frame 1
Mikhail is wearing his sunglasses and smoking. He is completely deadpan. His secretary, Getter is taking notes behind him.
Mihkail: Kameron Kori, why did you make me come to my office on New Year’s Day? It’s a national holiday, you know.
Kameron is clenching teeth and making claw-like gestures with his hand. He is yelling. His bodyguard, Tsar is standing around, cross-armed and looking bored out of his mind.
Frame 2
Kameron to Mikhail: You owe me crazy amounts of money, Mikhail.

Frame 3
Mikhail seems unimpressed, but Kameron seems more coy.
Mihkail to Kameron: Is that all?
Kameron to Mikhail: That and I need to vent about how my ex-boyfriend is a total asshole.

Frame 4
Mikhail massages the bridge of his nose.
Mikhail to Kameron:
I don’t want to hear about your nasty gay crap anymore.

Frame 5
Mikhail points towards Kameron as he turns towards Getter who is diligently typing. She seems a bit surprised and appalled
Mihkail to Getter:
Getter! Kameron needs to go out on a date with you.

Page 5
Kameron becomes enraged and replies with a scowl. Tsar tries not to laugh.
Frame 1
Kameron to Mikhail:
Mikhail, I don’t need a prostitute!

Frame 2
Getter is standing as Kameron has a hissy fit. Getter towers over Mikhail as he wraps his arm around her. She flashes a fake smile. She’s 6’3”, he’s 5’6”.

Mikhail to Kameron:
Getter is not a prostitute, Kameron. She’s an elegantly efficient secretary who loves getting expensive gifts from foreign dignitaries.

Mikhail to Kameron and Getter:
If she has a tendency to become uninhibited on dates, it’s only because she loves pleasing men so much.

Back to the pose on Frame 2. Getter’s smile is even more strained now.

Closeup to Tsar, he seems intrigued.

Tsar to Getter:
Excuse me Miss, are you Estonian?